I’m off to Calgary

Goin’ to Alberta soon,
Gonna be a dental floss tycoon!

Ok, maybe not precisely that, but I will be attending Calgary WordFest, giving exciting talks on the 10th and 11th. If you’re in town, come see me!

If you’re nowhere near Calgary, never fear. I will leave you with interesting things to read and think about.

First, at Lady Business, an informative post on Gender Balance and YA Award Winners Since 2000. I notice they did not include the Canadian Governor General’s Literary Award, so I include the stats here (with the caveat that some of the books may be middle grade and at least one looks like nonfiction) — 7 male, 5 female.

Zoe Marriot has some interesting things to say in response: Women Dominate? In What Universe?

Also buzzing through the YA blogosphere yesterday, an article from Read Now, Sleep Later about perceived stigma around the very label “Young Adult” – YA Shame and Stigma.

I come from comics and from SF/F, so I’m not entirely convinced YA has much of a stigma, or at least not universally. Sales don’t reflect that. Rapid expansion of the genre doesn’t reflect that. And honestly, are there books with NO stigma from anyone? Don’t we all turn up our noses at genres we dislike (or haven’t tried)? We are creatures of habit, and we prejudge things readily on little evidence. My personal stigmatized genres include “books where doggies die” and “adult literature that takes itself way too seriously”. I’m almost certainly missing a lot of great books because of these irrational biases, but what to do? I’m also missing a lot of great books by virtue of not having time to read them.

All right, darlings, take care. Be excellent to each other until I return.

Remember me mentioning that a friend had made a puzzle for me, laser-etched in black lucite? Well now it can be shown: 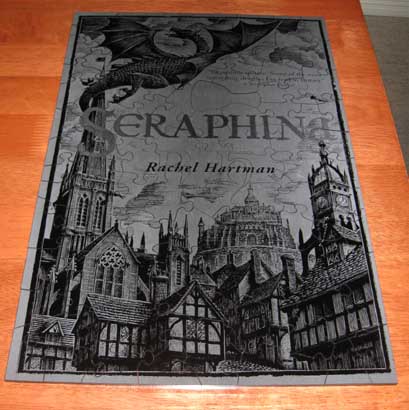 It’s even prettier in person. The black parts are all shiny.

The best part, though, is that the puzzle contains numerous custom-shaped pieces. My initials:

And two characters from my old comic series, Amy Unbounded: 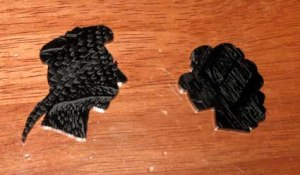 That’s Lalo, the original dragon in human form, and Amy herself.

Now, I need to make a little legal disclaimer here: this puzzle is not for sale. I did not buy it. It is a one-of-a-kind gift from a friend. He makes and sells all kinds of other interesting puzzles, and you should definitely check them out.

This comic is wonderful. (via several friends, Josh for one)

In honour of how grumpy I’ve been on and off for the last two months, here’s a comic strip I did for Strange Horizons, almost a decade ago:

For a writer, any time can be that time of the month

I need to add, however, that actual writer’s block is very rare for me these days. Maybe there is a cure, or maybe the same phenomenon takes different forms (the aforementioned cantankerousness, for example). Maybe it’s a matter of experience: I’m more likely to rip out pages and try something new if I get stuck, and I’m less likely to give up if the going gets tough (which it does, inevitably). I’ve got more stamina now.

My friend Phoebe North (who just got a book deal! Yay Phoebe!) recently did a question-and-answer post. One of the questions I posed her (besides the one that made her call me “evil”) was “What’s the one thing you really, really wish you had known before you began?”

Here’s my answer to that question: I wish I had truly understood how much stamina this was going to take. Maybe that would have deterred me, but I don’t think so. I’ve never been one to balk at a challenge. Having a realistic sense of the scope of the challenge, though? Would have saved me some grief.

The Non-Adventures of Wonderella.

A few of my favourite things

Hello darlings! I am traveling, but shall return to amuse you next week. In the meantime, here are a few things to tide you over.

Long ago, in a galaxy far, far away, I used to write, illustrate, photocopy, and staple a minicomic called Amy Unbounded. It was a pretty good minicomic, as far as these things go. I took it to comic book conventions, made a lot of friends, and had tremendous fun doing it; those were great years, and I wouldn’t change a thing even if I could.

But I have something I need to tell Amy fans, something they’re not going to want to hear. They’ve been asking me for almost ten years, and I’ve been hedging because I don’t like delivering bad news. But here it is, friends, and no more soft-pedaling it:

Amy Unbounded is done. There is no more in me. I will not be making more. I’m sorry.

It’s possible that I will make more comics at some point, for I dearly love to draw, but I can’t promise that. I can guarantee that characters from Amy Unbounded will find their way into other things I do; indeed, some already have. Dame Okra Carmine, Sir Cuthberte, and Squire Foughfaugh all appear in Seraphina. Amy herself, older and wiser, might sneak into another story someday. Goredd goes on.