I battle the wiggles

(That title will inevitably make some of you imagine me engaged in an epic struggle against these guys. In fact, it’s such an amusing image, I almost want to leave it at that — perhaps with an apology for putting that song in your head. It should only last month or two, until you happen to see a big red car somewhere.)

Back when I was in college, I read an essay by Daniel Pinkwater about his writing process. He used the “Butt in Chair” method: you park your butt in a chair and you don’t let yourself get up until a certain amount of time  has passed. You will get so bored, just sitting there, that eventually you’ll start writing just to break the tedium.

That essay was written before the internet. If you’re using a computer to write – and most of us are, anymore – there is always something else to do besides work, no matter how long you park your butt in that chair.

Here’s what I’m slowly learning to appreciate: it’s actually more useful to pry yourself out of the chair at regular intervals.

If I sit in front of the screen too long doing one thing, I get wiggly – both physically and mentally. I need to get up and move around, or I need to find something else to think about for a little while. Moving around easily turns into running errands and doing housework; thinking about something else becomes surfing the internet before I know it. Both these things equal “Rachel isn’t getting her work done.”

Writing is my job now. If I let myself be overtaken by wiggles, I don’t get my job done.

So here’s my current strategy: I schedule my wiggles. I work for 30-45 minutes, and then I wiggle for 5-15 minutes. I use a timer, so there’s no losing track. Acceptable wiggles include: exercise, housework, snack, quick e-mails.

It is possible that my day was breaking down into about this proportion of work to wiggling anyway (although possibly not, because the internet does occasionally sink its claws in me), but the other advantage is that I can easily and accurately keep track of how much time I’ve spent working. Word count isn’t always the best measure of a day, as I’ve discovered. It’s nice to have a tangible measure because there are plenty of days where I work very hard and feel like I’ve almost nothing to show for it by the end.

And there’s my timer! Wiggle time!

I don’t know what it is, but November always wipes me out. Every year.

It’s a hard time of year for me. The rains set in in earnest (which is serious, here in Vancouver); everything feels like an uphill slog. If I were astrologically inclined – which I am not – I’d have some theory about Scorpio being out to get me with pincers and stinger, and then old Sagittarius finishing off what’s left of me with his bow. In the absence of hocus-pokery, I guess I have to assume it’s some kind of tedious daylight-length sensitivity, or the fact that here in Canada our Thanksgiving is much earlier, leaving us no holiday to break up the intractable gloom between Halloween and Christmas.

(Yes, yes, there is Remembrance Day. That doesn’t really dispel the gloom, though, does it.)

Whatever the case may be, November is a time of year where I have to be extra kind to myself. One of the ways I do that is to uncork some bottled sunlight in the form of music. It’s time for the old favourites – just like Christmas is for some people (why do the depths of winter weigh less upon my heart? I do not know). Here’s what I’ve been listening to this month:

And the grande olde favourite, the song I always end up at, no matter where I begin: “A Nest of Stars“, by Iarla Ó Lionáird. I should write a whole post about that song. Another day, perhaps, when I’m not still fending off November with a pitchfork.

But look! Here comes December, before the week is out. And the sun is out today, which is a nice change. Whatever its other shortcomings, November does end, and usually on time.

I think, possibly too hard, about Twilight

With the release  of Breaking Dawn (the film), strong feelings about the Twilight series have once again risen back to the fore on blogs and discussion forums. Now, though, there’s a backlash against the backlash. A metabacklash, if you will. The inimitable Holly Black has her finger on the pulse of an interesting argument, as always.

This got me thinking, as appears to be inevitable. I’ve had a Twilight post fermenting in my brain for some time, and while it’s only tangentially related to Black’s post, now seems as good a time as any to write about it.

For those with short attention spans, or who fake a migraine any time I talk about art, I’ll cut right to the thesis: I don’t like Twilight, but I still think Twilight is art, maybe even good art. Unfeminist or not, modelling bad relationships or not, it has its place and it isn’t going to ruin kids who read it.

All righty then! Those of you intrepid enough to follow me into my Labyrinth of Argument, I’ll meet you under the fold!

END_OF_DOCUMENT_TOKEN_TO_BE_REPLACED

From Amazon.co.uk — it’s kind of awesome!

Just so we’re all completely clear: the US/Canadian cover will be nothing like this. I am not at liberty yet to say what it will be like, unfortunately. Still, this is very exciting for me.

Thanks to my husband for noticing it was up! 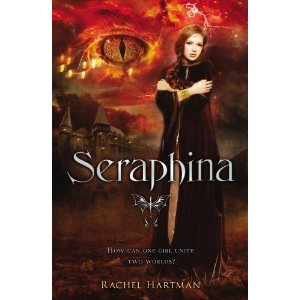 * I dreamed that I’d written the sequel in Persian up to the halfway point, and was terribly stuck as a result. I couldn’t even go back and read what I’d written, because it was all in Persian. I finally found someone who could translate it, but then the alarm went off before she was three sentences in.

* Now I’ll never know what happened, which is too bad. It looked much more exciting in Persian, but then, maybe everything does.

* Did anyone catch the Simpsons on Sunday? It was so much like my life that I was falling off the couch,  laughing and weeping. Lisa, in particular. She was writing a novel and her procrastination techniques were just epic. EPIC. Toward the end, she said, “A hard deadline will really help me focus!” and I completely lost it.

* I have concluded from this that I would make much faster progress if only I had Neil Gaiman here to bring me beer and tase me. Surely that could be arranged? Don’t tell me he’s busy. I watched the show. We all know better. “British Fonzie”, ha ha ha.

* In other news: my agent and editor surprised me by getting Christopher Paolini to read my book. He has written me a nice blurb, in fact, to go with my collection of blurbs from Tamora Pierce, Ellen Kushner, Naomi Novak, and Alison Goodman. What a nice surprise! I’ll have to put it up on the front page with all the blurbage.

* Five blurbs is, I believe, enough to make a hand in Blurb Poker.

Listening to my inner Abdo

(This post is a continuation of this and this and this.) (Also: sorry it’s taken me forever to put this up. It’s been a really rough week on the writing front, as other problems have brought themselves to my attention. But as I always say – and as my friend Arwen had to remind me that I always say – writing is never wasted.)

I have a head full of humans.

I feel I’ve known some of them forever. In rewriting Seraphina so many times over the course of eight years, it’s like I’m a director who’s been fortunate enough to keep working with the same actors. I know them all very well. I know what they’re capable of, and I know when they haven’t bothered showing up for work (looking at YOU in that section I just ripped out, Lucian Kiggs!).

They aren’t real people, of course. I understand that. But I think there is more to each of them than I’ve consciously put there. I think each one acts as a conduit for something my subconscious is working on – not always, but often, especially when I’m just getting to know them.

The subconscious is a slippery subject. I’m not a psychologist; I have no training in this area. All I have is my own experience and observations of my mind at work. I think of my subconscious as a deep-sea diver, plumbing my cold, unknowable unconscious and bringing up grotesque treasures in a bucket. The diver can’t talk, and the imagery she brings back doesn’t always make sense at first (although sometimes it makes shockingly clear sense). She’s always working, quietly and unseen. This is where strange connections and leaps of intuition happen. This is the part of my brain I’m talking about when I say, “Sometimes my brain is smarter than I am.”

It’s a hard-working part of my brain, but it doesn’t have much access to language in the usual sense. It has to make do with symbols. I make a study of my own symbols and try to work out what I mean. It sounds ridiculous, but I find it really fun.

So whenever one of these humans in my head starts acting up, I can usually be sure there’s something my non-verbal brain is trying to get across. This was the case with Abdo, who was mad at me for most of October.

END_OF_DOCUMENT_TOKEN_TO_BE_REPLACED

* Hello, darlings! I have returned from my weekend away, only to find that the world did not have the good grace to pause in my absence. Silly world! When will you ever learn? Rachel on vacation means you should definitely take a break as well, and not accumulate more things for me to do.

* I am working up my final knee-jerk blog post, but it is long and time is short. It will be up tomorrow, I hope. Edited to add: erm. Nope. Thursday or Friday. I overbooked today, and something had to give.

* I am bending NaNo to my will, using an algorithm of my own devising to convert “Time Spent Working” into “Fake Word Count”. That way, I can still see my progress on the handy graph, even as I go in and condense, weed, and improve all the crap I just wrote.

* Because seriously, I just wrote fifty pages where Prince Lucian Kiggs was there, but not there. He’d been replaced with Folger’s Crystals, or something — but I DID notice! I just didn’t know where the hell he had gone or how to get him back. I found him again (in my head!) over the weekend, so that was nice. He’s good people, is Kiggs; robot Kiggs just wasn’t cutting it.

* But that’s what the relentless page count was driving me to. That, and ZOMG adverbs! And redundancies of all kinds! And… and an obsession with Porphyrian plumbing!

* Er. With regard to that latter: my plumbing fixation is well-documented. The only time I have ever felt I may have lived a past life was when I visited Housesteads Fort on Hadrian’s Wall and found the Roman latrines utterly engrossing. Was I once a plumber for the Empire? Oh gods, I hope so.

* Until tomorrow, friends. Writing this doesn’t count toward my word-count algorithm, alas.