The SERAPHINA paperback has landed

Y’know, just in case you still need a present for someone. Not that any of you are procrastinators, to be sure, but it’s possible some unforeseen accident has taken all your presents away. Perhaps they were hit by a meteor, or they ate some bad oysters. These things happen.

(This post is brought to you by my darling husband, who last night casually asked, “Hey, doesn’t your paperback come out tomorrow?” It is really just as well that all the marketing is not dependent on me.) 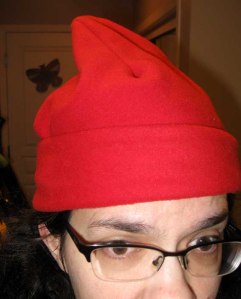 It’s that time of year again, when we don our red caps and pretend we know Latin!

So we kicked things off last night with our feast. Atypically, we ate at a nice restaurant instead of sweating all day over rock-hard barley rolls. It’s not that we’re getting too old and soft to eat rock-hard barley rolls, it’s just that ever since the Great Flood hit our apartment, our classical cookbooks have been packed away. [Note to self: future Jethro Tull filk, “Too Old for Barley Rolls, Too Young for Rye”] Last night we also gave gifts. I got an ASTOUNDING octopus brooch:

So bright! So beautiful!

If you’re wondering why I would want an octopus brooch, above and beyond the objective awesome of it, well, here’s a good place to start.

I also got a really big hug… after giving my son a whammy bar for his guitar. He really, really wanted to wham up some songs, apparently. [Note to self: Wham on? Whammerize? Whamminate? Look this up. And you call yourself a writer!] The best thing about Saturnalia is that we can drag it out for several days. Tonight we’re going to see The Hobbit: Battle of Ten Thousand Whammy Bars [NB: look this up, Rachel!], and then tomorrow night my husband and son are going to a Canucks game while I stay home, put my feet up, and pretend I’ve never heard of hockey. A good time will be had by all! I hope your holidays, whichever you wham upon, are full and lovely and happy, too!

Foreign editions trickle back to me in their own time, with little rhyme or reason as far as I can tell. Yesterday I received one that looked like this: 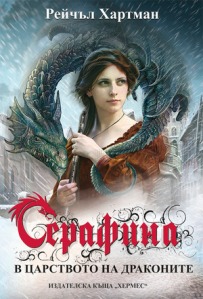 Isn’t that pretty? I think this is one of my favourites.

I assumed, based on the alphabet, that this must be the Russian edition, but my husband (who is some kind of language-bot, or possibly a dragon) said, “Not so fast! It might be Bulgarian!”

It turns out he was right, this is the Bulgarian edition, but that begged the question: what does the Russian edition look like? I know there was one, but I don’t have a copy yet. A little digging (my dragon husband is also a Wizard of Googling) produced this result:

Nice, eh? It’s so much fun to see the kinds of cover art the book inspires. I should probably gather all these together on one page someday.

And now, a medieval drinking song…

We’re singing this in Madrigalians, and it’s totally stuck in my head:

Our version has juicier harmonies, but I’m kinda digging the crumhorn and pipes here. I’m not entirely sure why this version comes from a Christmas album, though, as this is a straight-up paean to beer, nothing Christmas-y about it.

But the best (or possibly worst) thing about this song is that you could keep on inventing new verses for it until the end of time. You just follow the pattern, “Don’t bring us X, because Y, but really bring us ale, because Z.” Maybe that’s how it pertains to the holidays: you can sing it endlessly on long car trips! Grandma and Grandpa will be so pleased when their grandchildren arrive, singing loudly about ale.

Seraphina has done well in Germany, so it’s no surprise that my German publishers are quick off the mark with their Shadow Scale cover.

Titles often get changed in other languages, of course, and I’m sure Shadow Scale will see this a lot. Those two words won’t always make sense, shoved together like that. The German title translates as “Seraphina: the Shadow Dragons Rise.”

Ooh! That kind of gives me shivers, right there.

Or two of them do, anyway. Some of you may have already seen that Shadow Scale has gotten a starred review from Kirkus Reviews. Well, it has also received a star from Booklist. 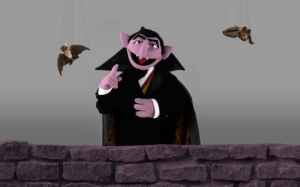 Seraphina got eight stars, an unbelievable number, a rare convergence of the literary heavens. It took some work for me to stop feeling, neurotically, that the second book had failed before it was even written, because how could it ever live up to the first? It couldn’t, on the star front anyway.

But we don’t judge our second children by our first — or at least, we shouldn’t — and now, if nothing else, we can say: “Shadow Scale got some stars!” Then we can back away gently from the glittering constellations, and maybe leave the counting to our publisher and the Count. He, at least, can’t seem to help it.

That’s right, folks. YALSA has just announced the 2015 Morris Award nominees, and they look like a lovely bunch of writers (and books). As is our ancient and venerable tradition, we previous Morris winners will be interviewing this new crop of fresh-faced youngsters in the weeks leading up to ALA Midwinter. Watch this space, darlings! I will be announcing the schedule as soon as I know it.

Congratulations to all the finalists!

Made it through November unscathed!

Well, no, not entirely. But it was a better November than some I’ve had, despite the fact that our apartment suffered a major flood from above. Flooding sucks, although I’m sure it’s better than fire. It may even be better than famine, but it’s still a giant pain in the rear. I’m tempted to say, “It’s just stuff,” which is an attitude I try to have about my belongings in general, but in this case it’s not just stuff — or not primarily stuff. It’s time and space, and stress and uncertainty, all of which turn out to be ten times the headache “stuff” ever was.

I hate not knowing how long we’re going to be living like this. I hate not being able to plan.

I don’t quite understand it, but somehow I was still able to work. In spite of all this stress and nonsense, I got 30K words written. It’s not quite NaNoWriMo speed, but I think it’s as close as I’ve ever gotten (especially in darkest November). In a way, writing was the one thing that didn’t seem to be floating away, a little island among whirlpools and eddies.

I’m hoping it continues, that this stream of words will keep sweeping me along. I know, I know, I’ve just transformed writing from a welcome island into the stream itself. For my next trick, I’ll turn it into a marmot.

But my point is: it’s December. We made it, darlings. November, mon ennemi, adieu.