Hello friends! I seem to have pulled something in my neck whilst travelling, so this will be brief. I’m going to be at the Emerald City Comicon in Seattle this weekend, speaking on two panels:

Beyond the Children’s Section: Young adult novels require more than a teenage protagonist. Learn the specific characteristics of the YA market and how to weave them into your narrative, with authors Lisa Mantchev, Holly Black, Arwen Elys Dayton, Rachel Hartman, and Aaron Michael Ritchey.

Reinventing Iconic Monsters: How do you take an ancient monster and make it new? Panelists Naomi Novik, Rachel Hartman, and Isaac Marion will discuss how they’ve turned time-worn tropes upside-down to create fresh and engaging stories.

There will be a signing after each event at JJ 10/11, books provided by University Bookstore.

I hope to see some of you there! And now I have to go lie down some more. Stupid neckbones.

My friend Karen New, a fabulously talented composer, has written music to “Blessed is he who passes, love,” the last set of lyrics in Seraphina. And not just a melody, no, but a madrigal in four voices which we will sing in Inchoiring Minds next quarter. It’s beautifully done, very Renaissance-y (pretty sure that’s a word, since I’m a writer and all).

My babbling intro is inadequate, so you’re just going to have to go have a listen and then join me in marvelling awe-struck at it.

The Soundcloud version sounds like a woodwind quartet; obviously, the choral version will have words. Here are the lyrics from Seraphina so you can sing along in your own head (Karen’s version requires these words to be sung all the way through twice).

Blessed is he who passes, love,
Beneath your window’s eye
And does not sigh.

Gone my heart and gone my soul,
Look on me love, look down
Before I die.

One glimpse, my royal pearl, one smile
Sufficient to sustain me,
Grant me this

Or take my life and make it yours.
I’d fight a hundred thousand wars
For just one kiss.

The lyrics, in fact, were directly inspired by two other songs. One is “Chi passa per ‘sta strada,” by the 16th century Italian composer Filippo Azzaiolo (here’s a spiffy instrumental version with Yo Yo Ma). The first line of the song expresses a sentiment similar to my own – what a blessing it would be to be able to walk down the street without sighing – and was my jumping-off point for creating the rest of the lyrics (I also did this with “A thousand regrets,” earlier in Seraphina, riffing off the title of another famous Renaissance song).

My other inspiration was “Deh veni alla finestra,” from Mozart’s Don Giovanni. Here’s Samuel Ramey singing it, the version my sisters and I used to sing along with. Singing under someone’s window with your lute was apparently the romantic thing to do, once upon a time, and hyperbolically insisting you were about to die was just par for the course.

…I was on The Morning Show Toronto to talk about Shadow Scale. Before I went on there was one other guest waiting his turn, a gregarious black man who introduced himself as Chad, asked me about myself and the book, and then took a picture and had one of his assistants post it to Instagram. The whole time I’m thinking, “His voice sounds really familiar! I feel like I should know who he is. He’s not Isaac Hayes, because Isaac Hayes is dead — but who is he?”

I quietly asked one of his assistants, embarrassed for the man himself to know I couldn’t place him, and she was like, “Ever watch The Wire?” No, I’ve never watched The Wire. “How about The Walking Dead?”

I love The Walking Dead. He’d played Tyreese. I felt pretty silly, but in a way it was nice because we’d had an actual conversation without me fangirling all over him.

Anyway, that’s my little brush with fame for today. At least I managed not to be too embarrassing. I’ve had fans of my book worry that they said something silly in front of me — please don’t feel self-conscious about that! We all do it, and I think I was only prevented by not knowing who he was for most of the time. Sometimes it really is better to have a slow reveal.

OK, I’ve been kind of bad about announcing my own events, but there’s a big one tomorrow in Toronto, and I just wanted to remind you it was happening. 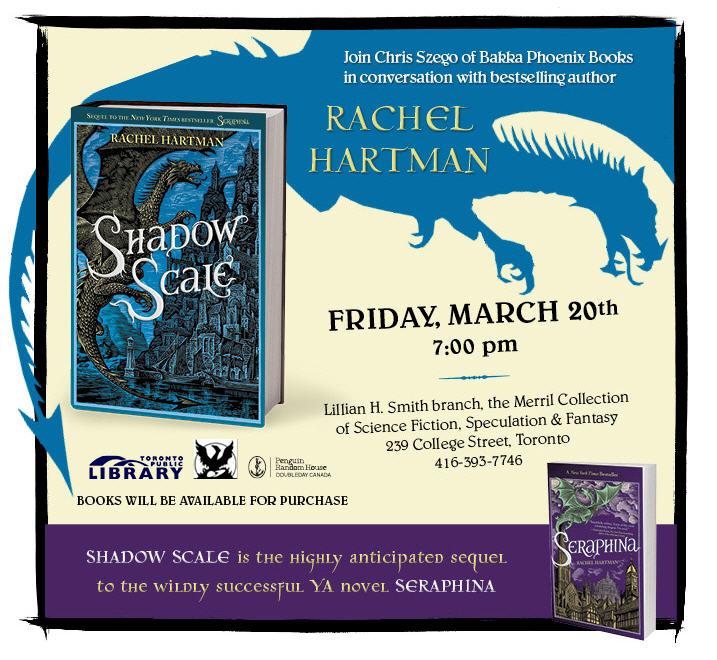 They’ll be selling books, and I’ll be signing them. Please do come, if you’re in town! I’d love to see you all!

I’m having a lovely time on tour. This is just a reminder that I am going to be at Children’s Book World in Haverford, PA, tomorrow evening at 7pm.

I used to work at this bookstore, so coming back is always a special joy for me. It really is like coming home.

Later this week: Michigan! And then Toronto! See my Appearances page for details.

I want to write about Terry Pratchett, and I don’t even know where to begin. He wrote so many wonderful and consoling things about death (or, y’know, Death) that I feel the tiniest bit guilty for being so very sad he’s gone. I feel like I should be able to face it with some kind of humorous equanimity, something like:

Ahahahaha! And yet. I has all the sad. I’m afraid I’m going to have to play it straight.

I never read any of his books until I moved to Canada, and even then I had several false starts. I tried reading The Colour of Magic and I didn’t get very far. It looked like a pile of undifferentiated jokes to me, and while the jokes were individually hilarious, in a heap they were rather overwhelming. It was like eating nothing but cake, all the time. Another one that I remember disliking was Maskerade, which as far as I could tell was nothing but a send-up of Phantom of the Opera. It was funny enough, for what it was, but I honestly couldn’t see what all the fuss was about.

I’m not sure why I kept trying.

Going Postal was the book that finally opened the door for me, the one that made me realize there was a human behind the mountains of jokes, a human who was preoccupied with many of the same things I was. The Tiffany Aching books followed close on its heels, as well as Thud!, and by the time I’d gotten through those I felt like I knew exactly who I was dealing with.

And he was something remarkable, something I’d never quite seen before. He was using the twin fists of humour and fantasy to punch the world in the face. These were, in fact, extremely serious books about difficult and hard-hitting subjects, but he’d disguised it so cleverly that you couldn’t quite tell. I think the mask did slip a bit in his later years, and that was why I found his more recent books more accessible. I find it easier to read the early ones now that I’ve glimpsed the wellsprings beneath them; his preoccupations have been the same all along, and now that I know what to look for I see them everywhere, shining like diamonds.

I wrote a little tribute to him on the Terry Pratchett Appreciation Tumblr a couple years ago, and I don’t think I can sum up his influence on my writing any more perfectly than this:

Nothing was out of bounds, not death, love, politics, or religion. A fantasy writer could say exactly what needed to be said and could run any thought experiment conceivable. It was a revelation, and it set me free.

I cried when I learned that he had died, and I cried again later that day when a middle-school student asked me who my favourite writer was. “Isn’t it amazing,” I said, “how deeply books can move you, and what a strong connection we can feel to someone we never met?”

I used to call him, only half-jokingly, my long-lost time-travelling twin, or my spiritual uncle, because we were preoccupied with so many of the same kinds of questions. We didn’t always come to the same conclusions, but his were always humane, hilarious, and well worth considering.

“Light thinks it travels faster than anything but it is wrong. No matter how fast light travels, it finds the darkness has always got there first, and is waiting for it.” —Reaper Man

Thank you for everything, old friend. I’m going to miss you.

Many people e-mailed me about this today, but there may still be a few of you who haven’t seen it: In ‘Shadow,’ Change and Growth as a Story Sheds its Scales.

In other news! Had a delightful time at B&N Lynnwood today. I was able to have some excellent, in-depth conversations with my readers, which is something I enjoy very much. And I was told, in no uncertain terms, that I need to put more pictures of our whippet, Una, on my blog.

Well. Your wish is my command.

An oldie but goodie.

It’s been a long day and I have to get up early to fly to Seattle, but I just wanted to say that the party at Kidsbooks was just wonderful. Thanks to everyone who came out for it. My husband didn’t take a lot of pictures because our friend Liz was taking a LOT of pictures and her pictures are the best. But here’s one of me pontificating:

“This is a book. I have filled it with words for your delectation and edification,” said the author, whose dress had little sparkles on it.

I also got some flowers from the lovely folks at Doubleday Canada. Thank you Amy, Pamela, and Trish!

That’s not very coherent, but it’s all I’ve got tonight. Thank you everyone who sent me kind notes or happy tweets today. It was the best book birthday ever.

Here it is! Many thanks to all my readers, for their patience and faith in me, and to the good folks at Random House, who have been nothing but encouraging and kind. The book wouldn’t be here without you all.

A little bit of linkage, and then I’d better start my day. I have a guest post up at My Bookish Ways about the fantasy worlds that have inspired me, and another at Tor.com about my five favourite theological fantasy novels.

Here’s a nice review from Misty at The Book Rat, and another from Jenn’s Bookshelves.

And the book, of course, is out in the world today. Happy birthday, book. It was a difficult labour, much worse than your sister’s, but I love you just the same.

Away with me! I have to pack for my trip and prepare for my launch at Kidsbooks. Thanks again for reading, everybody!

It’s super exciting, although for some reason I still have to do laundry and clean my kitchen. I had hoped that maybe by this point in my career those things would magically happen by themselves, but they don’t seem to.

Be that as it may, here’s an amusement to tide you over: a lovely conversation I had with Christopher Paolini about Shadow Scale, writing, dragons, and music. And probably other stuff, too. It turns out I do babble on. The interview also contains my trademark giggling in copious quantities, so you really don’t want to miss out on that.

(Seriously: I laugh a lot. If you ever meet me, you will notice. If you meet me and I’m not laughing, chances are I’m storing it up for later.)

See you tomorrow, friends. Thank you all for your support, your patience, and your high tolerance for silliness.