In which Neil Gaiman makes me feel better about life

I’m not sure why, but this essay cheered me up: All Books Have Genders. The last paragraph, in particular, is something I really needed to hear right now, as I bang my head against my keyboard and shout, “Why am I not better at this after all this time??”

I’m still learning to write this book. We’ve made some good progress, coming to understand each other a bit better, over the last few weeks, but then I have days like yesterday where I finally had to admit to myself that the scenes I was trying so heroically to save weren’t worth saving and that I needed to scrap them and fill the GAPING HOLE with something else instead.

If Neil Gaiman finds writing a convoluted process, then maybe it’s ok if I do too.

In other news: doggies make us feel better! Here’s mine. 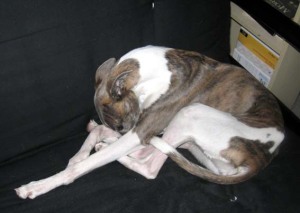 AWWWW! That’s how she sleeps, sometimes, all folded up like an umbrella. I took her out to the dog park today and she was just so cheerful, despite the rain.

Maybe I can be, too. Back to work…

(It’s been a while since I wrote an Origins post! If you’re interested in the previous instalments, here’s the first one, or you can check out the “Roots” category under the “Preoccupations” heading on the sidebar.)

I sometimes hesitate to bring up my influences because it can create inaccurate expectations. If I list Tolkien as an influence, you might assume I’ve written a sword and sorcery quest book. If I mention Neil Gaiman, suddenly my book (in your imagination) turns into a Goth girl with black nails and an ankh necklace. Which would be awesome, but nothing like my book.

I guess my caveat here is that influence isn’t the same as resemblance. If you want to know who I write like, I would protest loudly that I’m probably the least qualified person to answer that question. If you won’t accept that answer, I might say, “John Green?” in a squeaky little voice. Which is nuts, right? Except that it’s not: we’re both preoccupied with epistemology and our books are full of nerds. I’d call that a resemblance. (I fully expect this to come back and bite me someday, when somebody sends me an irate letter saying, “Hey! Your book is fantasy! I was expecting John Green!” Allow me to say preemptively: Oh, were you? Oops.)

I can’t call Green an influence, though, because I never read any of his books until Seraphina was pretty much done, and my husband has not yet invented that time machine I keep asking for. (Confidential to my husband: DUDE. TIME MACHINE. I need it like, yesterday.)

I consider influences to be writers (or others) who have taught me something new and expanded my understanding of what is possible in art, people I technically owe a thank-you note or maybe even a fruit basket. Seraphina and I owe this debt of gratitude to Terry Pratchett, Lois McMaster Bujold, and George Eliot (TIME MACHINE, NEUTRINO MAN).