← Come see me — and others, who are not me!
Morris season is here again! →

It is my distinct pleasure to have interviewed Ngozi Ukazu, author and illustrator of the first graphic novel to be nominated for the Morris Award. Check Please! Book 1: #HOCKEY is a charming, hilarious tale of hockey, pastry, and self-acceptance. 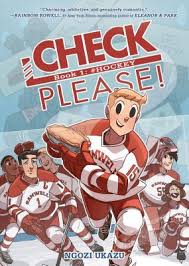 I’m not a hockey person, I admit; it’s my chief failing as a Canadian. If you’re not usually into “sports fiction” either, I would encourage you to set that preconception aside and give this a try. There’s a principle I try to live by: the best art in a genre I’m unfamiliar with is by definition better than the mediocre crap I’m willing to put up with from my comfort-zone genres. Here, that’s definitely true; the wit, charm, and humanity grabbed me right away, and never let go.

I even have my own hockey name now — Hearty! — thanks to this book, so you see I’ve come away a changed reader.

Anyway, that’s all preamble — you’re here for the interview! Without further ado, let’s turn this over to Ngozi, who is every bit as delightful as her book.

1) How would you sum up Check Please! for readers who haven’t heard of it yet — and especially readers who might be a little iffy about hockey?

Check, Please! is about hockey–but it’s also a slice-of-life, lgbtq, coming-of-age romance with found families, college friendships and baking. It’s like hockey is the fluffy crust of the Check, Please! pie, and the positive themes and fresh cartoony art style are the sweet filling.

2) I have to admit, I know nothing about hockey (despite being Canadian) and was pleasantly surprised by all the charm and humour. Your intro says you didn’t grow up with hockey either. What drew you to it, and what did you do to research the subject?

My interest in the sport began during my senior year at Yale, after I completed a screenplay about ice hockey which required an extensive amount of research. I was inspired to write about ice hockey after a Yale hockey player in my freshman German class made an off-hand, generalized, and very interesting comment about his team’s sexuality.

I’m a first-generation Nigerian woman–a black woman–and a Texan. These aren’t necessarily identities you would associate with ice hockey, admittedly. But the conservative, conforming, white, hyper-masculine environment of ice hockey was a fertile arena to tell a critical and quirky story about gender and sexuality.

I interviewed hockey players and the beat reporter for the Yale hockey team, watched movies and documentaries, and read ethnographies about hockey culture–and went to a TON many hockey games. I’ve always enjoyed sports and the intersections of sports and culture, and this very strange Canadian game has decades of history and tradition. By the time I was done with research I was so immersed that I was hooked. I was a hockey fan!

3) What’s your background in baking, and did you research that as well? (and do you need help disposing of the evidence?) My ONE disappointment was that Bitty keeps talking about recipes he’s posted, but here are no recipes in the book! Did the original webcomic have recipes?

Alas! I can neither ice skate or bake! I have no pie-knowledge to back-up Bitty’s savant skills. 😦

4) This is the first graphic novel Morris nominee – overdue, in my opinion! – and your artwork is a big part of the book’s charm. It’s friendly and accessible, with a great eye for body language. Did you always draw? Can you tell us a bit about your techniques and processes? I assume it’s all done digitally?

I was always interested in drawing, but didn’t take comics and art seriously until mid-way through college. After I realized I should havenever considered majoring in computer science, I pursued art more seriously and eventually enrolled in a sequential arts MFA program to learn how to create comics. I make  Check, Please! by (a) writing and thumb-nailing (sketching) out pages in a notebook, then (b) drawing the line work and coloring the pages in Photoshop, and finally (c) lettering the comic in InDesign. I would say 95% of Check, Please!: #Hockey was completed digitally. There are a few pages that I inked by hand.

In terms of style–I love being able to draw expressions and big eyes. Composition that focuses on faces and the upper-body lends itself to that. I often act out my character’s dialogue to get a good feel for how they should move.

5) Before it was a book, Check Please! was a webcomic, and I understand you ran a very successful Kickstarter campaign to self-publish collections of the strips. The Morris-nominated volume is published by First Second, and collects two years’ worth of strips. Can you tell us a bit about your publishing journey, the ups and downs, and the community you’ve built along the way? Do you go to comic cons?

I launched  Check, Please! the summer after I graduated from college in 2013. It was originally going to be a mini-series–maybe 4 or 5 chapters–and I was using it to practice my draftsmanship and composition. But as the story unraveled and storylines emerged, I knew I needed illustrate Bitty’s freshman, sophomore, junior and senior years. While I was posting the comic online to Tumblr, I still remember getting my first piece of fanfiction and absolutely losing my mind–someone was thinking about this story after they finished reading it? And after a year of sharing the comic, I remember when I opened online orders for hand-crafted Check, Please zines that I would print out at Office Depot and staple by hand. They sold out instantly. The community had surged from dozens of people sharing fanfiction to groups of people around the world writing reviews of chapter updates and organizing Check, Please! fanfic drives and meetups.

In 2014, I printed out “samplers” of the webcomic and selling about one or two at a mini-comics convention. (I ended up giving most of these away for free.) But in 2015, I decided to self-publish Check, Please! and this initial Kickstarter raised over $74,000. If you had told me that by 2018, the cumulative amount raised across all Check, Please! Kickstarters would be well over $800,000–I would have called you nuts. But the enthusiasm the readers showed for these self-published versions is exactly what gave Macmillan and First Second the confidence to put Check, Please! in bookstores. (While letting the contents of the book remain online!)

6) OK, I lied, I have one other complaint! The two school years go by too fast. It’s an interesting choice — so many comics freeze time and no one gets any older. Where are our friends going from here, though? Is the next book two more years of college, or do you slow things down at some point? And what’s the plan after that – stick with Samwell hockey or follow Bitty out into the world? Or wrap it up and do something else entirely? Tell us whatever you can without spoiling!

The comic does jump around–and goes by extraordinarily fast. I was excited about the idea of Bitty living his life in real time (I was even tweeting as him at one point–which was a lot) and that meant drawing a year of his life over about one and half years of mine. The next book Check, Please!: Sticks & Scones slows down the pace a bit, but it does cram Bitty’s junior and senior years into a single book.

After that? I move on to a new series! Check Please will be over!

a) Favourite writing/drawing beverage?  black coffee with a splash of almond milk

c) Comic we should all be reading?  Girl Town by Carolyn Nowak

d) Have you seen the Stanley Cup in person?  Never!

e) Most useful skill for the zombie apocalypse? Adaptability